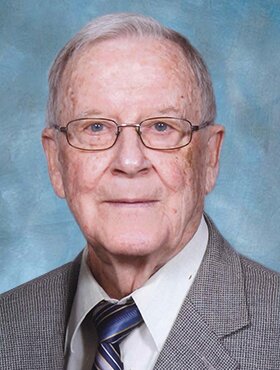 John " Arnold" Klotz beloved husband of Dorothy Klotz (nee Bechthold) of Calgary, AB, passed to his rest on Tuesday, May 31, 2022, at the age of 91 years.

Arnold was born in Stettler, AB., on May 19, 1931, the last of seven children to homesteading parents, William and Margaret. His early years were simple, beginning in a one room country school which also served as the community church. At the age of nine years, Arnold moved with his family to Armstrong, BC., and later to Kelowna where he completed high school and then on to further training in Vancouver in the insurance industry. He later returned to Alberta where he became co-owner of Action Insurance.

Arnold loved God and was active in his church, serving in various capacities. He enjoyed the outdoors, skiing, camping and hiking. He and Dorothy spent their retirement years travelling.

He is survived by this loving wife Dorothy; two sons, Andrew of Vernon, BC., and Stephen of Winnipeg, MN; and grandson Brady.

Condolences, memories and photos can also be shared and viewed here. Sincere thanks to the staff at Newport Harbour Care Centre for their loving care in the past four years.

Share Your Memory of
Arnold
Upload Your Memory View All Memories
Be the first to upload a memory!
Share A Memory
Send Flowers