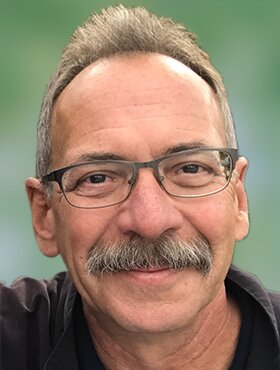 With broken hearts, we announce the passing of George Gene Karpiuk, on Friday, June 17, 2022, at Foothills Hospital in Calgary, surrounded by his daughter Alex and his two best friends, Mike and Kari.

George was born October 14, 1954, to Betty and the late George Karpiuk in Fort William, Ontario, where he lived and was very involved in the Ukrainian culture. After high school, George went west to Alberta, settling first in Edmonton, where he further pursued his love of dance. The Ukrainian culture was very important to George. He was a member of the Ukrainian Dnipro Ensemble, with whom he sang and danced; the Cheremshyna Ensemble, as well as the Balada Romanian Folk Dance Ensemble. His participation in these groups gave him the opportunity to travel and perform in the Philippines, Australia, Hawaii, and Romania. In 1981 he performed in Kupalo, the first Ukrainian opera in Canada. George was also able to return to his family roots in Ukraine a number of times.

George spent many years working for Canadian Tire, which brought him to Calgary. He moved on for a time and worked for Hammer Equipment, eventually coming back and purchasing a Part Source Franchise. These were the happiest days of his work life. He was very proud of what he accomplished. He was employed by APD up until his illness.

Family was also very important to George. He was a loving and supportive dad and very proud of the “Kid”, his daughter Alex. He took advantage of any family gathering to go home to Thunder Bay to be together to celebrate. His last visit home was for Ukrainian Christmas, in 2020. Besides enjoying the traditional Christmas Eve supper with his entire family and close friends, he caroled the night away along with his siblings and other carollers.

For many years, George enjoyed going to his trailer at Ol’ McDonald’s Resort on Buffalo Lake, Alberta. It brought George great pleasure to host and entertain his friends and family with his wonderful cooking and the warmth of the “Bat Cave”. George loved to play golf and organized an annual golf tournament at the Haunted Lakes Golf Course, where he scored a hole-in-one, but also had a pond named after him for raising the water level with all the balls he lost there.

George was diagnosed with cancer in 2017. Although he was given a short time to live, he beat the odds. As his illness progressed, he lived with grace and humour, and peacefully took his last breath on June 17, just a few days short of the anniversary of his father's passing.

He was predeceased by his grandparents in Canada and Ukraine, numerous aunts and uncles, and several cousins. He was also predeceased by his niece, baby Lauren Hibbert. Left to mourn his passing are his daughter Alexandra (Tim), his ex-wife and best friend Kari Karpiuk (Don), his mother Betty Karpiuk, his sister Natalia Hibbert (Kelvin), brothers Myron (Patricia) and Jerry (Zuzana); nieces Lisa and Hannah; nephews John, Eric, Colin, Kristof, and Daniel; and great-nieces and nephews Jasper, Ariane, Connor, Adelaide, Lilianna, and Mykhailo.

Cremation has taken place and a Celebration of George’s Life will be held at McInnis & Holloway (Deerfoot South, 12281 – 40th Street SE, Calgary, AB) on Thursday, July 7, 2022, at 2:00 pm. Reception to follow in the Hospitality Centre at the Funeral Home. Condolences, memories, and photos may be shared and viewed here.

He was a friend to all and will be missed by many who loved him.