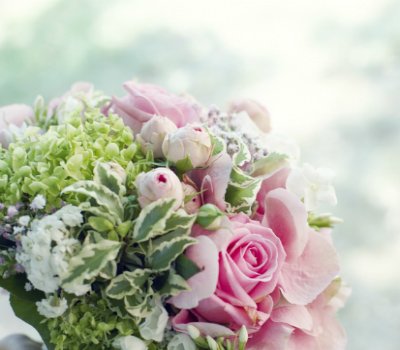 Doris Mitchell, beloved wife of David Edward Mitchell of Calgary, AB, passed away on Monday, June 27, 2022, at the age of 96 years.

Doris grew up in Oklahoma. In Junior High School, she joined the school band and became a drummer for two bands – a show band and a marching band. They were a big part of her life right up until the end of high school.

As a teenager, she realized she had a talent for decorating. Those skills never left her. Throughout her life, decorating was a passion of hers. She used her skills to decorate family and friends’ houses, and also some company offices. She excelled at it.

During school, she also grew to love football. She cheered for the Oklahoma Sooners. (Her love of football remained throughout her life, and, after moving to Canada, she also started watching tennis, Canadian football, and hockey. She was a big Flames and Stampeders fan.)

She graduated from a business college and then went to work in the credit department at a local department store. It was during that time she met the love of her life, Dave. They were set up on a blind date. Both tried to get out of it, but eventually did meet up at a bus station in Oklahoma. They got married in 1949. Doris supported Dave while he completed his degree at the University of Oklahoma.

After he graduated, the time came to move to Calgary. It was a courageous move for Doris, because very little was known about Canada, let alone a small city in Alberta. Doris loved Calgary though, and really enjoyed the cooler temperatures. Even the snow didn’t faze her, as she thought it was beautiful.

They made many lifelong friends, and, as Dave moved up the corporate ladder, Doris was beside him every step of the way, helping to further his career. She was the quintessential hostess and was very well known for the parties she organized and hosted for friends, family, and business associates. Her decorating abilities were evident at each party. People still talk about some of those parties, even today.

Doris eventually overcame her fear of flying and went on many business and personal trips. She traveled the world, and she met many influential people in different countries. She loved traveling and seeing so many places and enjoying the food in most countries.

She LOVED to shop! It was one of her favourite things to do. Many would say she was born to shop. It didn’t matter if she was shopping for food, clothes, parties, household décor, or things for others, especially her grandchildren, she loved it all. It brought her great joy.

She was strong willed and had strong opinions about everything in the world. One of the things she always commented on was the clothes people wore, whether it be family members or commentators on tv. She was always well dressed, and thankfully she picked out Dave’s clothes every day and packed his clothes for business trips.

After living in Canada for about 50 years, Doris became a Canadian citizen. It was a very proud day for her and her husband.

She lived an amazing life, and she often commented about that and relished the memories. Doris and Dave were married for 3 weeks shy of 61 years, before Dave passed away.

At her request, a private service was held for immediate family.

Doris is survived by her daughter Donna, grandchildren, Derek, Jessica, Miranda, and Carolyn, former daughter-in-law Karen, as well as numerous nieces, nephews, cousins, and friends. Doris was predeceased by her husband Dave and son David.

Special thank you to Shyla - a Nurse Practitioner from Direct Health Solutions. Her help and excellent medical care the past few years were invaluable. Thank you also to Nurse Next Door and some special caregivers.

Condolences, memories, and photos can be shared and viewed here

If friends so desire, memorial tributes may be made directly to the Alberta Children’s Hospital Foundation, 28 Oki Drive NW, Calgary, AB,  T3B 6A8, Telephone: (403) 955.8818, www.childrenshospital.ab.ca

Share Your Memory of
Doris
Upload Your Memory View All Memories
Be the first to upload a memory!
Share A Memory