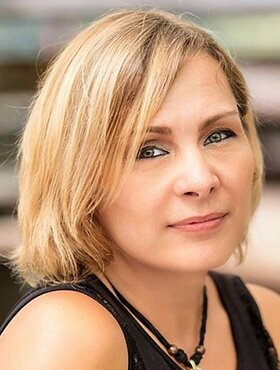 It is with immense bittersweetness to announce the Homecoming of Rosanna Jeanne Evans. Rosanna was called Home on Saturday, July 9, 2022, at the age of 54 years surrounded by friends and family.

Rosanna was born on Tuesday, August 22, 1967, in Oliver, British Columbia. She grew up with her two brothers, Joe and Edward Walls: and her parents Edward and Diana Walls.  As a child she grew up in the church and taught to ‘respect’ God without any understanding of a real relationship with her Creator. Between misrepresented bible teachings and other mitigating circumstances in the church she was in, Rosanna utterly rejected Christianity and God Himself, choosing Atheism as her preferred world view.

In September of 1983, Rosanna married the love of her life William (Bill) Evans and they had two children, a daughter named Tabitha and a son named William (Bill Jr.). By the time she was married with children, Rosanna wanted to ‘find God’ and adopted various religions while systematically rejecting them. She would only read the Bible in order to prove it wrong and eventually immersed herself into the occult. While practicing the occult her little daughter who was five at the time repented, trusted in Jesus and began to pray. Eventually God brought Rosanna and Bill to their knees and on October 15, 1994, they repented and dedicated their life to serving the Lord, answering their little girl’s prayers.

After becoming a Christian, Rosanna finished her GED at Bow Valley College and was going into astrophysics. God had other plans, and after kicking and screaming, she graduated Rocky Mountain College with her bachelor’s degree in Biblical Studies and eventually finished her Masters in Divinity. Although she had extensive education in theology, she never worked for, or in a church, but would lead Worship music, Bible Study and, for a short time, youth group. During the years of her kids’ teenage hood, her home was a place of refuge for misfits and the broken hearted.

Rosanna worked for McInnis & Holloway for almost two decades and for Life Mark Health in her spare time. Her kids graduated and Rosanna gained a son in 2005 when her daughter married Bradley Warholm. The family continued to live and grow with the Lord. Rosanna gave away countless bibles, had hundreds of theological discussions with anyone who had a question and lived life well. Later her son was married, and although it did not work out, Rosanna still loved and constantly prayed for her daughter-in-law and her son’s in-laws. In 2018 the family’s prayer for her daughter and son-in-law to have child came to pass and they were expecting Rosanna’s first and only grandchild. While she and the family were ecstatic about the birth, Rosanna knew something was wrong. She consulted with her doctors and since losing her weight, all her test came back normal. On February 8, 2019, Rosanna and her family welcomed Hadassah (Haddy) into the world. A few months later, between working, spending time with grand baby and ministering to a close sister-in the Lord with cancer, medically things seemed to get worse. In April 2019, Rosanna was told that she had inoperable stage four colon cancer and was given three months to live. Her response was ‘Okay, what do we do next’, and doing things non-conventionally, she shrunk two tumours enough to be operated on.

For the next three years, between appointments and treatments, Rosanna lived life as a vessel for bringing the Gospel to anyone who was willing to hear. She relished time with her family, especially watching her granddaughter grow. In December 2021 the cancer spread into her bones and caused a hip fracture. While healing, her prayers changed from having fifteen more years to staying until she was done her Revelation study. She finished her study at the beginning of June and at the end of June she moved in with her daughter. She spent her last week and a half surrounded by her family caring for her. On the morning of July 7, 2022, there was a change in Rosanna and everyone around her knew that she was being prepared to go Home. She went to Strathmore Hospital who kept her comfortable and allowed her family and numerous friends to say a final goodbye. At 2:42 pm on July 9, 2022, Rosanna went home holding the hands of her sweetheart and one of her close friends. She not only lived well, but she also died well and was welcomed Home.

A Celebration of Rosanna’s Life will be held at McInnis & Holloway (Park Memorial, 5008 Elbow Drive SW, Calgary, AB) on Saturday, July 23, 2022, at 10:00 a.m. Reception to follow in the Hospitality Centre at the Funeral Home. Family and friends who are unable to attend in person are invited to join Mrs. Evans service streamed live (see below) on the day of the service. For those who are unable to view live, a recording of the service will be posted. Condolences, memories, and photos can also be shared and viewed here.

Share Your Memory of
Rosanna
Upload Your Memory View All Memories
Be the first to upload a memory!
Share A Memory
Send Flowers