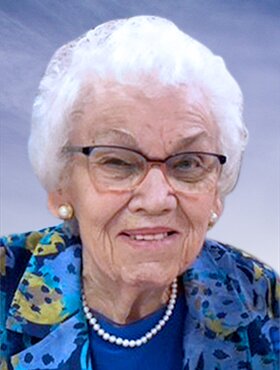 Kathleen Smith of Calgary, AB, passed away peacefully with family by her side on Saturday, July 16, 2022 at the age of 97 years.

Kathleen was born in Strome, AB, on June 10, 1925 to Louis and Caroline Miller. She was the youngest of seven children. She left the family farm when she finished school and moved to Westlock, AB to live with her sister, Marie (Lindy) Lindahl. There she met her future husband, Vern Smith, who was a Constable (Cst.) with the RCMP stationed in Westlock. They married in 1952 to begin an adventure that moved them frequently within Alberta. Throughout, Kathleen was a loving and devoted wife to Vern. Their lives had many challenges, and together as a team they faced and conquered each one. They shared a marriage and partnership that were an example to many. In 2010, Kathleen proudly accepted the Second Man Award from the RCMP to recognize the support she provided to Vern during their posting in Ft. Vermilion, AB during the 1950’s. This award recognized the unique challenges and hardships they endured in an isolated posting. Like other wives recognized, Kathleen was often called upon to support various police operations from answering calls to providing prisoner meals.

Kathleen was a friendly, undemanding woman. She could turn a quick trip to pick up the mail into an outing as she stopped to chat with everyone she met. She loved to visit with family, friends and new people she met along the way. People frequently commented on what a lovely and kind lady she was. Kathleen was never demanding or impatient.  She never wanted to be a bother to anyone and would never ask for any special treatment. Kathleen was proud of her children, grandchildren, and great-grandchildren. She was a ‘stay at home mom’ who instilled her strong values into her children. She was always available to her children and their families whether it was to provide a listening ear, a shoulder to cry on, sage advice or physical assistance.

Kathleen forever mourned the loss of their daughter, Patricia Goldie, in 1997 to cancer. Without hesitation, Vern and Kathleen relocated to British Columbia temporarily to care for Pat during the final months of her life. Family always came before her own needs.

Kathleen was a natural homemaker. She was proud to provide a comfortable and welcoming home for family and friends to enjoy.  She and Vern also enjoyed travelling in their motorhome. In addition to many shorter trips, they also enjoyed many years as Snowbirds spending their winters in Mesa, AZ.

Kathleen and Vern relocated from Calgary to Canmore in 2016 where they enjoyed living at Origin at Spring Creek. Kathleen suffered a fractured hip in early 2021 and as a result, relocated to Carewest Royal Park, Calgary in June of 2021 where she could receive more care.

A heartfelt thank you to the dedicated staff of Origin at Spring Creek and Carewest Royal Park. The care and kindness that you have shown to Kathleen have been sincerely appreciated by the family.

Kathleen will be laid to rest alongside her beloved Vern and their daughter, Pat, at Eden Brook Memorial Gardens.

Share Your Memory of
Kathleen (Kay)
Upload Your Memory View All Memories
Be the first to upload a memory!
Share A Memory
Send Flowers