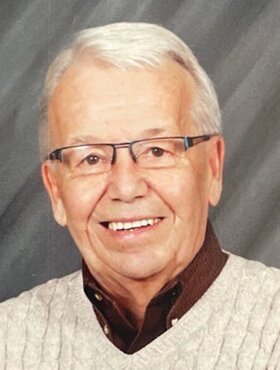 It is safe to say that the final chapter of our dad’s life wasn’t the best part of the book, however the rest of the story wasn’t half bad!

Philip James Dean, or Jim as he was known to many of his friends passed away peacefully on Wednesday, July 27, 2022 at the young age of 78, in his sleep after a short but challenging battle with dementia.  Although this was what ultimately sent him to heaven to be with his wife Geri, it is certainly not how we will choose to remember him.  We will remember him as a loving husband, a caring and supportive dad, a great friend, and a truly a good man.

Jim was born on January 12, 1944 in Swift Current, SK to Phil and Marie Dean. He along with his only sister Dianne, spent most of their youth living in Yorkton, SK which is where he developed his love for music, education, and good friends.  Having a mother who taught piano and father who was away fighting in the war helped to shape much of Jim’s character.  It was also during this time that Jim developed his great sense of humour.  Even though dementia robbed our dad of his brain, it certainly didn’t take away his spirit or his heart, nor did it steal his sense of humor.  Even in his final days Jim could be seen chuckling at an intelligible joke he would utter or create a face that would express his sarcasm. Rarely do us kids ever meet a past friend or colleague of his who doesn’t remind us of how funny Jim was.

Jim spent a good majority of his life as an educator.  He started teaching at the ripe old age of eighteen and he truly never stopped.   He was a teacher, a principal and ultimately a superintendent, almost entirely with the Calgary Board of Education.  It was during these times that he made many, many lifelong friends.  Some were colleagues, some were employees, and some were past students.  Regardless of how you came into Jim’s life, he never forgot you.  Until his brain went on early retirement, he always remembered a name, and certainly a face and always had a good story to tell.

As much as Jim was both admired and respected in his professional life, it was in his personal life where he truly overachieved. Our mother Geri was his soulmate and partner for close to 30 years.  He absolutely fought way above his weight class in order to court and ultimately win over Geri. His sense of humor most definitely played a big part in capturing Geri’s heart as he kept her laughing for many of their 30 years together before she passed away in 1997.

Jim and Geri are both survived by three mostly good kids!  Todd (Dylan), Trent (Carla) and Carla (Chris) were immensely proud to have called Jim and Geri our mom and dad.  Their unwavering love and support were unconditional and although they had a modest lifestyle, no one ever went without.  Our memories are not about the things our parents gave, but of the experiences we shared, the opportunities they to afforded us, the role models they represented, and the importance of both friends and family that they instilled in us.  We sincerely could never have asked for anything more.

The legacy that Jim has left behind is reflected in not just his own kids but in his four grandkids as well (Owen, Easton, Claire and Lucy). Grandpa was loved and revered by his grandkids, and he will be dearly missed by them as well.  Anyone who was ever fortunate to have crossed paths with Jim, whether it was in his work circles, his various volunteer endeavours such as the Calgary Stampede, the White Hatters at the Calgary Airport, the people at the Calgary Food Bank or even those at his neighborhood pub would all have received a good dose bragging about his kids and grand kids from Jim.

Jim’s “Book of life” could be filed under many different genres. It could fit into drama or romance, education or how to, and definitely comedy.  It is a mostly happy story filled with the usual sub plots of over coming adversity, success, failure, love and sadness.  One thing is for certain, it would be a good read for almost anyone.  Maybe if luck would have it, one of us kids will attempt to write the sequel. Probably not Todd, but hey, you never know!

We love you and miss you very much dad.  Give mom a big hug and a kiss from us all. We promise to keep telling the good story!

Anyone interested in sharing in Jim’s life celebration is welcome to join family and friend at McInnis & Holloway (Fish Creek, 14441 Bannister Road SE, Calgary, AB) on Friday, August 12, 2022, at 2:00 p.m. Reception to follow in the Hospitality Centre at the Funeral Home. Condolences, memories, and photos can also be shared and viewed here. If friends so desire, in lieu of flowers, memorial tributes may be made in Jim’s name to the Calgary Interfaith Food Society, 5000 – 11 Street S.E., Calgary, AB T2H 2Y5, Telephone: (403) 253-2059, www.calgaryfoodbank.com.

A special thanks to the wonderful staff at the AgeCare McKenzie Towne long term care facility for their compassionate and considerate care.

Share Your Memory of
Philip
Upload Your Memory View All Memories
Be the first to upload a memory!
Share A Memory
Send Flowers