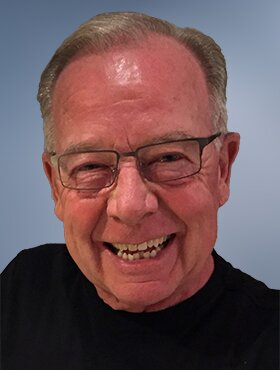 We are sad to announce that Gerry passed away peacefully on Thursday, July 28, 2022 at the age of 77 years.

Gerry is survived by his loving wife of 51 years, Marnie Christine Ward, as well as his son Darren Ward (Sarah), his grandson Lincoln Ward, and daughter Carissa Ward (Mike). He is also survived by his brothers, Don Ward (Carol) and Brian Ward (Candace), his brother-in-law Bruce Wiber (Rebecca), and many nieces and nephews. Gerry was predeceased by his older brother Bob Ward in April 2022.

Gerry was born and raised in Regina, SK, second oldest of four boys. Gerry moved to Edmonton to attend U of A after high school. He got a part time job at the Capitol Theater, where he first met Marnie, and four years later, on March 13,1971, they were married. Gerry’s mother Una taught all of her boys to dance at an early age, so dancing was in Gerry’s blood. Dancing with Marnie was his favourite thing, and if there was a dance nearby, you would find them there.

Gerry started his career with the department store Woodward’s and worked his way up to store manager. After managing many of the stores in Edmonton, he was transferred to Calgary in 1988 where he managed the Chinook Woodwards. When the chain closed, he was hired by the Bay and worked there until his retirement. He was loved and respected by his staff wherever he managed.

Gerry retired at age 58. He enjoyed retirement, where he learned to cook, worked a few part-time jobs, golfed, and volunteered for Big Brothers and Sisters in the “Between Generations” program for many years! Together with Marnie, he travelled with friends on several cruises, golf trips to Thailand, Portugal, South Carolina, and California. There were many Gin games and shenanigans along the way that Gerry was happy to participate in.

Twelve years ago, Gerry and Marnie fell in love with Leisure World in Mesa, AZ, and bought a great little house. They had wonderful winters there with new friends and old relatives, playing golf and discovering Gerry’s love of pickleball.

Gerry was a hands-on dad. He loved watching all the kid’s athletic pursuits and cheered loudly. He coached baseball and was the year end MC for Carissa’s dance studio for many years. He learned to tap dance and showed off once or twice on stage with his shiny tap shoes. He enjoyed the many ski trips taken as a family, as well as the skiing they did with friends. His “team” was the Riders, of course, but the Edmonton Oilers became his hockey team and watching the playoffs this year brought him great joy. Gerry was most proud, however, when both Darren and Carissa graduated from U of C and began their careers in teaching and nursing.

Gerry was a fantastic grandfather and loved getting down on the ground to play games with Lincoln. He would never miss a game of Hide and Go Seek in the dark.

Gerry loved his life! He was a gentle, kind, funny man with the huge smile and a big laugh!

A Celebration of Gerry’s Life will be held at McInnis & Holloway (Park Memorial, 5008 Elbow Drive SW, Calgary, AB) on Monday, August 8, 2022 at 2:00 p.m. Reception to follow in the Hospitality Centre at the Funeral Home. Condolences, memories, and photos can also be shared and viewed here.

If friends so desire, instead of flowers or a donation, please consider using that money to go buy a pickleball paddle and learn to play the game. Gerry would love that!!!

Share Your Memory of
Gerald (Gerry)
Upload Your Memory View All Memories
Be the first to upload a memory!
Share A Memory