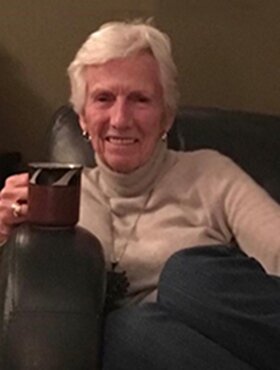 Joyce Iannone, beloved mother, grandmother, and great-grandmother passed away on Monday, August 1, 2022, at the age of 93 years.

Joyce was born in Saskatoon, SK, the third of five children to Samuel Hurst Kennedy and Myrtle May (Wall). She married Louis Anthony Iannone in 1950 and together, they moved to Calgary, AB where they raised their six children. Joyce lived a busy and fulfilling life. She did secretarial work and owned and operated a boutique. She enjoyed painting and sketching, published a book about her life for her children, and engaged in various volunteer positions. She did all this before returning to her education which had been interrupted in high school. She continued to the University of Calgary, graduated with a BA in Art History at the age of 53, and later, worked in the English department.

Joyce took great pride in her home, was a lovely homemaker/hostess (always up for a conversation, a glass of wine or cup of tea), and a devoted wife and mother-her family was her world! She often said she was truly blessed with a wonderful life, and gave thanks, in part, to her Catholic faith.

Joyce had a great sense of humour, quick Irish wit, which she kept till the end, and often said getting old was a difficult climb. She had a genuine interest in people and their stories, and she had significant empathy for those less fortunate and gave assistance where she could.

“When the One Great Scorer comes to mark against your name, He writes not that you won or lost, but how you played the game.”

Joyce played the game with authenticity, integrity, compassion, and courage. She will be deeply, deeply missed. A private, family service will be held at a later date.  Condolences, memories, and photos can also be shared and viewed here.

Share Your Memory of
Joyce
Upload Your Memory View All Memories
Be the first to upload a memory!
Share A Memory
Send Flowers