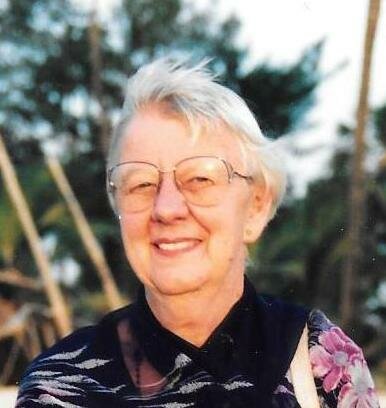 Born to Gaelic speaking Scottish immigrants, Mary had a happy, secure childhood.  She got a BA from University of British Columbia, worked at the Carnegie Library in Vancouver’s downtown Eastside, then received a library degree from McGill University in Montreal in 1950. Her first professional job was with Hamilton Public Library where she met an electrical engineer from India. They married in 1952 in Lucknow in newly independent India, where the Gour family welcomed her warmly as a daughter, standing in for her family at the wedding. Mary sounds like the Hindi word “Mine”, so she was called Meera.

Narendra’s first job was in New Delhi, where Mary worked at the Canadian Consulate, meeting other Canadian and American women married to Indians, calling themselves “the mixed-up wives”. Three daughters were born in Delhi. The Indian Government sent Narendra to Manchester, UK, for 3 years’ training. Mary took the girls to Canada for the final year, to visit family.

Back in Bhopal, India, in 1959, Mary taught at the Convent School the girls attended. When the family moved to New Delhi, Mary worked at the American International School Library. She learned to drive, saying “life begins at 40”. In 1967 the Mishras immigrated to Canada, to Burnaby, BC, where Meeraji was known for her Indian food, Diwali and New Year’s parties with other immigrant families from India. She also reconnected with old friends of her youth. She had a successful and innovative career at Burnaby Public Library, starting as Children’s Librarian, ending as Head of Children’s Services. She was a strong advocate for children’s services and was proud of the Burnaby Story Bus that brought story times and puppet shows as well as books to the community. The girls remember meeting Dennis Lee and Christie Harris through their mother’s work.

With a move to Calgary, AB in 1981 she continued her career with Calgary Public Library, first as Branch Head at Forest Lawn, then twin branches Georgina Thomson and Louise Riley. Travels continued: a Library Conference took her to Australia and New Zealand with old friends, and to Hawaii with an old high school friend. She explored the Rockies and Badlands, traveled to India regularly to see her grandchildren, continued to host friends and family and the Vedanta Society, attended the Hindu Temple in Calgary with her husband, and sometimes accompanied him on his volunteer conferences. After retiring in 1990 she volunteered at the Glenbow Library and with the Calgary school system, helping children read.

Throughout her life she made lasting friendships with people from all ages and backgrounds. She will be missed by many for her warmth, easy hospitality, humour, wit, kindness and wisdom. She gave good advice when it was asked for. Her empathy informed her intelligence. She knew what you might need before you did and offered it unobtrusively. Like her husband, she did not say or do an unkind thing. Her children remember she gave them the confidence and freedom to explore and roam, always welcome home.

A Memorial Service will be held at McInnis & Holloway (Park Memorial, 5008 Elbow Drive SW, Calgary, AB) on Sunday, September 11, 2022 at 2:00 p.m. Reception to follow in the Hospitality Centre at the Funeral Home. Family and friends who are unable to attend in person are invited to join Mrs. Mishra’s service streamed live (see below) on the day of the service. For those who are unable to view live, a recording of the service will be posted. Condolences, memories, and photos can also be shared and viewed here.

If friends so desire, memorial tributes may be made directly to a charity of your choice.

Share Your Memory of
Mary (Meera)
Upload Your Memory View All Memories
Be the first to upload a memory!
Share A Memory