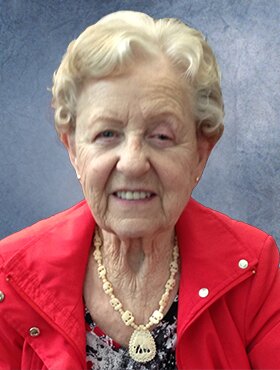 Wife to Helumt Boehli, beloved mother to sons, Fred and Roy, mother-in-law to Maureen, and Oma to Marlena and Richard, Catharina Maria Boehli of Calgary, AB, passed away on Sunday, August 28, 2022, at the age of 91 years.

Catharina was born Toos Van den Houdt on March 20, 1931. She left her home of seven brothers and sisters in Waalwijk, Holland in the early 50's to help her brother's budding family in Canada. It was here in Calgary that she met and married Helmut to begin her own family.

Described by many as fun, a firecracker, lively, sharp, and a character. She was never one to shy away from joining in the fun, to lend a hand, or to put someone straight. She was as comfortable in a hardware store as she was in a clothing boutique. She had a real "do it yourself" attitude to life whether it was designing her own outfits, refinishing the kitchen cabinets, or re-upholster the furniture. There were few things she wouldn't or couldn't do.

She was strongly devoted to her family yet held a yearning for the fondness, togetherness, and upbeat chaos of the large family and friends she grew up with in Waalwijk. She missed that life deeply. She was the last and longest lived amongst all her brothers and sisters. While Alzheimer's slowly took her away from us, it could not touch that Dutch Strength of personality. Abilities and memories were fading, but the essence of who Catharina was stayed with her until the end. She will be missed by many.

Share Your Memory of
Catharina (Toos)
Upload Your Memory View All Memories
Be the first to upload a memory!
Share A Memory