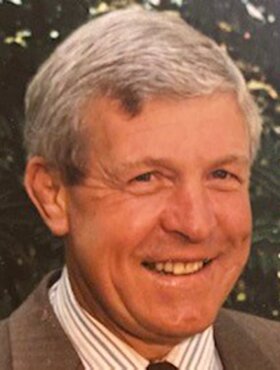 It is with deep sorrow that the family announce the passing of David Lillywhite, beloved husband of the late Pamela Lillywhite (nee Stevens) of Calgary, AB on Monday, September 5, 2022, at the age of 90 years.

David was a kind, gentle and loving father, grandfather and husband.  He was an ever-present supporter in all his family’s endeavors and a quiet strength to us all. David emigrated with Pamela from England shortly after they were married in 1958. After a quick stint in Winnipeg, MB, David and Pam felt the call of the mountains and they soon moved to Calgary, AB to raise their family.

David had a tremendous belief in the power and value of volunteering. David’s great passion was for the rugby community and the development of rugby at the club, civic, provincial, and national levels and committed his time wherever it was needed. Whether he was playing, coaching, refereeing, fundraising, selecting, organizing international matches, or building clubhouses, David enjoyed it all. His favourite time was gathering with friends, new and old, after a match on a Saturday afternoon. David was a proud lifetime member of Esher Rugby Club in Hersham, UK and a founding member of the Saints Rugby Club in Calgary. Pam and David spent their retirement travelling to six Rugby World Cups.  They were always happy sitting side by side in the stands watching a game.

A Celebration of Life will be held at the Calgary Rugby Union (9025 Shepard Rd SE, Calgary, AB T2C 4R6) on Saturday, October 15, 2022 at 1:00 p.m. for all who would like to raise a glass in honour of both Pam and David Lillywhite. Condolences, memories, and photos may also be shared and viewed here.

If friends so desire, memorial tributes may be made directly to the Calgary Saints Rugby Club through their website. www.saintsrugby.com

Special thanks to the care staff at Cedars Villa Extendicare in the Maple Unit for the supportive care they provided to David.

In living memory of David Lillywhite, a tree will be planted in the Ann & Sandy Cross Conservation Area.