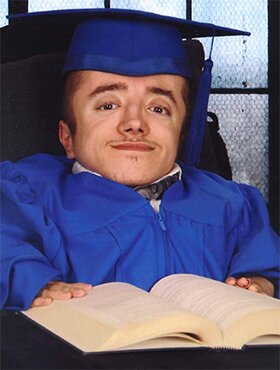 It is with deepest sorrow that we announce the passing of our beloved, Josip Tomic, of Calgary, AB, who passed away on Wednesday, September 7, 2022, at the age of 28 years.

Josip was born September 1, 1994. He was born with physical challenges that he endured throughout his entire life, but never stopped him from achieving anything he put his mind to. From finishing early education and high school, to finishing Bow Valley College, and then later working in the West District MLA office and G.R.I.T., Josip proved that he could take on any task.

Josip had a zest for life and an attitude to take over the world. He had a personality and energy that filled the room. He was always smiling, laughing, and he knew how to live life to the fullest. He was an avid coffee enthusiast and the #1 Flames Fan.

At only 28 years old Josip affected many people in his lifetime and will be remembered by friends, colleagues, and members of his community. Those who knew Josip have lost a shining light in their lives but will forever have the lasting memories of such an amazing man.

Josip passed away unexpectedly on Wednesday, September 7, 2022, succumbing to injuries while on his way to get his favourite cup of coffee. He will be missed dearly every day by his parents, Slavica and Boro, his brother Mario, sister Marina, grandmother Ruzica, as well as many uncles, aunts, nieces, nephews, cousins, and friends.

Funeral Mass will be celebrated at Our Lady of Marija Bistrica Croatian Catholic Church (14680 Deer Ridge Drive S.E., Calgary, AB) on Tuesday, September 13, 2022, at 11:00 a.m. Graveside Service to follow at Queen's Park Cemetery. Condolences, memories, and photos can also be shared and viewed at here.

Share Your Memory of
Josip
Upload Your Memory View All Memories
Be the first to upload a memory!
Share A Memory
Send Flowers