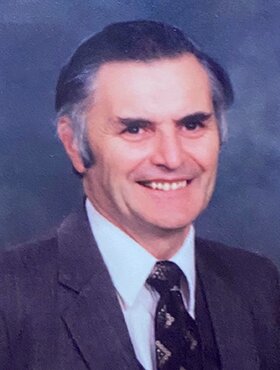 The family will be holding a private Celebration of Life

Gwynne Jones, beloved husband, father, and grandfather passed away on Saturday, September 10, 2022, at the age of 90.

Gwynne was born in Llanvihangel, Crucorney, South Wales on December 12, 1931. He grew up as a farmer cultivating the land and raising livestock. On weekends he would herd his animals to market, along with the rabbits he would trap to sell for food. He also would catch and break wild ponies for some extra pocket money. He won dance competitions and sheep shearing contests, and wheeled around on his motorcycles through the Welsh countryside.

Gwynne married his childhood sweetheart Margaret in 1954. Margaret was evacuated from Birmingham, England to the Welsh countryside to avoid the never-ending bombs of WW2. In retirement, they enjoyed traveling and had many adventures exploring the globe.

Gwynne’s family worked hard supporting the war effort and housed families displaced by the bombing of England. Unfortunately, after the war and the loss of his father, the family also lost the farm. Desperate for a new life, he decided to migrate to Canada in 1954. He eventually ended up in Alberta and began a grueling job of climbing telephone poles for Alberta Government Telephones (AGT) in the 50s, working through the frigid Canadian winters. Hardworking, intelligent, and driven to provide a better life for his family, he worked his way up to foreman and finished in upper-level management, retiring from AGT in 1988. He was instrumental in ploughing cable across all of Alberta, providing telephone service to Albertans, which in this time period, was the connection to the world. He proudly stated that he had the dubious distinction of staying in virtually every hotel in rural Alberta.

He was a respected member of the Rockyview community for his endless support of his sons in Conrich and Chestermere schools. He became president of the Chestermere building committee and was proud to help bring a new hall and arena to the Chestermere community.

He is survived by his lifelong love Margaret, his son Roger and his wife Dorothea, and and their daughter and son-in-law Christi and Marc and their children, Dylan and Evan; and daughters, Jenny and Sarah, his son Stephen and his wife Mary Lynne, and their children Julie, Shannon, David, and Rhea; and his self-adopted grandchildren Trevor, Heather, and Jennifer. He loved to play cards, especially crib, and gave many skunking’s to all of the above loved ones.

Gwynne was a remarkable man who treated everyone with kindness and respect. He was a hardworking, tough, no-nonsense man, but also a kind, gentle, calming soul. Family meant everything to Gwynne, and he would do anything for his family. He will continue to be cherished, loved, and thanked for all he has done for his family who all proudly carry the middle name of Gwynne as a legacy to an amazing man!

A private Celebration of Gwynne’s Life will be held with immediate family.

Share Your Memory of
William
Upload Your Memory View All Memories
Be the first to upload a memory!
Share A Memory