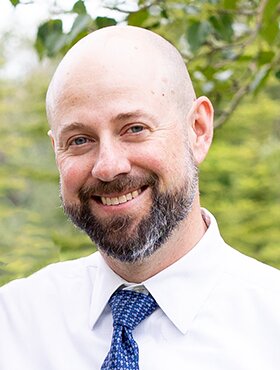 It is with great sadness that we announce the sudden passing of Jonathan “Corey” Janssen, beloved husband of Tanya Janssen (nee Klassen) of, Calgary, AB, on Sunday, September 11, 2022, at the age of 48 years.

Corey was born in Calgary to Rudy and Betty Janssen on June 20, 1974. He graduated from Lord Beaverbrook High School in 1992. Corey attended SAIT and completed the Telecommunications Engineering Technology program in 1994. He enjoyed a career with Nortel Networks in wireless network engineering. Most recently, Corey co-owned ViTechs Automation, a small business specializing in home automation.

Corey enjoyed many different athletic pursuits. He was an accomplished downhill skier. He also loved mountain biking, hiking, hockey, and basketball. He freely gave of his time and volunteered extensively at Trinity Christian School, where his children attended, and coached almost every team that Katrina and Luke played on. As well, he served on the school Board of Directors for three years.

Corey was a loving husband and father. His wife and children were everything to him and he was involved in every aspect of their lives. Evening walks were a favorite time for him to catch up with his family, share a funny story from his day, and toss a football. He loved to plan family excursions and paid attention to the smallest details to make our time together special.

Corey will be forever missed in the hearts of those he left behind. He is survived by his loving wife Tanya; and children, Katrina and Luke. He is also survived by his parents, Rudy and Betty Janssen; his siblings, Jenny Felsmann, Sherry Marr (Eric), and Jamie Janssen (Brianna); as well as numerous nieces and nephews.

A Celebration of Corey’s Life will be held at McInnis & Holloway (Deerfoot South, 12281 – 40th Street SE, Calgary, AB) on Saturday, September 17, 2022, at 2:00 p.m.  Reception to follow in the Hospitality Centre at the Funeral Home. Condolences, memories, and photos may be shared and viewed here. If friends so desire, memorial tributes may be made directly to the Alberta Cancer Foundation, c/o Tom Baker Cancer Centre, 1331 - 29 Street N.W., Calgary, AB T2N 4N2 Telephone: 1 (866) 412-4222.  www.albertacancer.ca/memorial.

Share Your Memory of
Jonathan "Corey" Rudolf
Upload Your Memory View All Memories
Be the first to upload a memory!
Share A Memory
Send Flowers