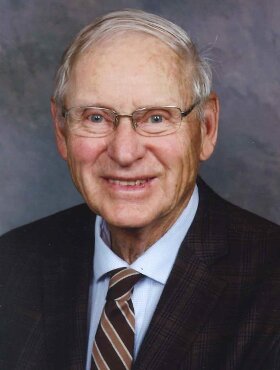 Don James Stiles passed away peacefully with his sons at his side on Tuesday, October 11, 2022 at the age of 90 years.

Don was predeceased by his wife Daphne in 2008, his brothers Gordon in 1999 and Kenneth in 2006. He is survived by his three sons, Andrew, Philip, and Geoffrey.

Don was the first-born son of three to Ed and Marjorie Stiles in the homesteading frontier of eastern Alberta. Veteran is where his grandparents, full of optimism, begun their homesteading adventure in 1910. By the time he was born in 1931, conditions were so intense that these years of scarcity would permanently engrain a frugal mind set in him. For many years it did not rain, and in others great clouds of grasshoppers would descend and eat everything in sight. His resourceful parents would stretch every resource, which meant repurposing rags for clothes, hunting rabbits and harvesting weeds as food. He had two younger brothers to make up country fun, like rafting the on the spring melt in wooden boxes across the fields. Children were like free range chickens in those days, always outside and hence in constant danger. One day Gordon was wading in the creek when he hit a hole and went in over his head. Don’s quick thinking and extra height saved his life. Another time it was Gordon’s turn to return the favour. Don was playing in a grain hopper when the worker suddenly turned on the auger, sucking him down.  Gordon was in just the right place to yell out and save the day.

All of Don’s extended family were farmers, and he might have gone down that path had it not been for the good fortune of Alberta’s oil boom. The Leduc discovery in 1947 was right at the end of high school and set him up for pursuing a degree in geophysics at the University of Alberta. It was here that he got interested in religion, thanks to friends that he dormed with that were studying to become ministers. Through his single years he worked for a traveling seismic company and claimed to have been in every single community in Alberta, as well as lots of Montana. Field crews would shoot data by day, and he would often process it at night with hand calculated mathematics. When he took a job with Texaco in 1956, it meant he could reside in Calgary and get involved with the Young Men’s Christian Association. Thanks to the social enrichment of this organization, Don met a young English woman who was working her way across the country, getting jobs that required her strong literary skills and instinct for the right expression. Don and Daphne were married in Knox United Church May 1964.

Shortly after Andrew was born (November 1965), Don got word he was to be given training state side in the newly emerging field of digital computer technology. Philip was born in Houston 1968 where they enjoyed the beaches and American culture. They were back in Calgary for Geoff’s arrival in 1970 and have loved being here ever since. Don was in the right place and the right time to prosper as a family man and exploration geophysicist. A great age of discovery unfolded every day at the office as he and his team worked the sedimentary basins of the world. He deciphered the secrets underneath the earth and advised on where huge amounts of capital should be deployed. From Pembina to Rainbow Lake, from Trinidad to Timbuktu, there are well locations that hit the target more often than not thanks to Don.

But it was the active life he lived away from the office that is really worth talking about. He loved the beauty of nature and was passionate about its preservation.  He collaborated with many of like mind and spoke up for the preservation of Nose Hill, writing a book with Nature Calgary that helped sway City Hall to preserve it in 1973. He offered leadership to many groups, wrote articles, gave time and treasure, and participated in so many meetings that it would likely qualify for the Guinness book of world records. Most importantly, he took his family on adventures that celebrated the wildest, grandest places across the continent. His three sons fondly remember epic road trips to fishing spots up logging roads that took their toll on the family station wagon.

Don opted for early retirement in 1991, having enjoyed a very rewarding career that overlapped the glory days of big stable companies. He got to know the Texaco gang and for years did a monthly luncheon and compiled a newsletter to keep the community alive. At his United Church, he served on the refugee committee and sponsored families from five nations, getting to know their plight and seeing them through to prospering citizens. He had a passion for justice and took the time to be the church’s man on the scene when it came to peace rallies, Kairos, and Project Ploughshares.

Don was also known as Mr. Bluebird. In 1977 he started a bluebird trail, and that hobby has grown into a huge network of like-minded friends that have truly made a difference for nesting birds. His love of note taking, and data analysis was only outdone by his loyalty to the project. He faithfully monitored his trails in Didsbury and Priddis for 45 years. He received a lifetime achievement award by the Ellis Bird Farm for his enormous efforts to train others in the fine art of birdhouse management. Add to that a long list of recognition milestones from across the environmental community, and you get a sense of his depth of concern for God’s good earth.

By the grace of God he was completely independent until his final month of life. He was actively banding birds, hosting at Lake Bonavista, and attending Fish Creek United church. He is grateful for the many friends that took the time to do life together over 91 years. Don could often be seen at public events such as history week, bridge club, bird study group, concerts, and church socials. He always enjoyed bumping into old friends while being intellectually stimulated. He will be deeply missed by three free spirited boys who hope to emulate even a fraction of his virtues. He had the hope of Heaven in his heart because he believed that Jesus was who He said He was, saviour of the world. Thanks be to God for Don’s life well lived.

Share Your Memory of
Donald (Don)
Upload Your Memory View All Memories
Be the first to upload a memory!
Share A Memory
Send Flowers