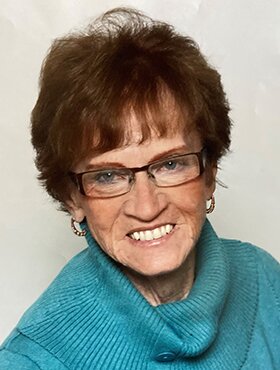 Merle Phillips of Airdrie left this world on Monday, October 17, 2022, at the age of 90 years peaceful in the knowledge she did not walk through the valley of death alone.

Merle’s desire was to be remembered as a person everyone loved to be around. Not a crabby old woman. And she made that happen with a philosophy of living that secured a place in the heart of all who met her. Merle credits her Aunt Nina for telling her to always be herself, and her mother for modeling the positive attitude that she in turn practiced throughout her own life. These gifts she bequeathed to others.

Merle was born Beulah Merle Black in Belle Plaine, Saskatchewan to the late Hector Black and Mabel Beulah (Haggerty) on May 2, 1932. She grew up on a farm amid the hardship of the Great Depression.  Though her family had little money, her memories were filled with the joy of living.  The song of the meadow lark. The beauty of the sunrise and sunset.  Family picnics of fried chicken, potato salad and pies, often shared with neighbors. The delight when each member of the family got a whole orange one special Christmas.

As a child, Merle worked hard. She fetched the cows, milked them, gathered eggs, filled the wood boxes, separated the milk, and weeded the garden, but there was always time for play. Merlie, as her Mom called her, was the youngest of four, and since her sister Agnes and brother Bill, were eight and seven years older respectively, her brother Neil, just eighteen months older, was her playmate.  Merle thrived on all things outdoors and preferred to dress in what was considered boy’s clothes at the time, wishing for a pair of high-top boots to complete the outfit.  Swimming in the river and dugout, climbing trees, building forts, tobogganing, spending time with the animals, horseback riding. These were favorite activities, filled with joy and laughter. Her journey to horseback riding began early with her pet pig, Gertie.  As a young child, Merle rode about the farm astride her pig, gathering eggs and exploring, much to the chagrin of her father who was a horse and cattle breeder.

In 1949, not long after her father died, Merle moved to Victoria, BC with her mother and brother, Neil.  She worked at a local bank until signing up for the Airforce in 1954. Claiming that when young, she had more nerve than Dick Tracey, Merle was not afraid to travel across Canada by the train to Quebec for basic training. Happy for the adventure, she said, “I was excited to move and not at all scared to leave mom”.  After completing her training in Quebec, she moved to Ontario to work in payroll for the Airforce and that’s where she met the late Joseph Bertrand Phillips (Bert), whose ‘lovely’ blue eyes and respectful demeanor won her heart. Two years after leaving Victoria, Merle married Bert in a private ceremony on Base Rockcliffe in Ottawa, and soon after they moved out west.

Hearing there was plenty of work in Fort St John, they made the slow journey from Vernon, BC via the Big Bend Highway, on through Northern Alberta and then west back into BC.  ‘Dick Tracey’ was on the move.  They spent 2 years in Fort St John which was the only place, Merle said, where your gumboot clad feet could be stuck in mud in the middle of the street while your hair filled with blowing dust at the same time.  Yet according to her, one of life’s happiest times, the birth of her son, Budd, happened in FSJ in 1957.

Merle and Bert left Fort St John when Budd was two years old and purchased their first home along Bessette Creek in Lumby, BC.  While living there she welcomed two more children into her life.  Daughters, Dawn Marie and Gale Elaine.  In 1963 they moved to a farm outside Lumby. She along with Budd, Dawn and Gale all have joy filled memories of farm life.  There, they were all very happy.

In the late 60’s, Merle and her family moved to Calgary where she worked as a lab assistant for many years. After retirement, she moved to Carstairs to be closer to her favourite golf course where she spent her days golfing.  Golfing every available second. Merle approached the end of her life with few regrets save two. You’ve probably guessed one. She wished she’d started golfing earlier so she could have developed her skills even more.

The second regret Merle expressed was not taking advantage of opportunities that came her way. For not pursuing more things.  She said she was too busy having fun, dancing, and partying, to take education seriously. Yet time would prove she traveled through life gathering opportunities and making the most of them.   When she wasn’t golfing, or spending time with family or friends, she painted. She joined a guild, took classes, honed her skills, and left her family with walls filled with her paintings.  Paintings that show the world through her eyes.  Wonder.  Beauty.  Curiosity.  Pictures where her optimism and joy and personality shine through.

And if her fears grew with age, it didn’t stop her from choosing to live life to the fullest.  Merle traveled with friends to different sunny locations. Cruises, Disney World, Australia, Cuba, Mexico. All filled with stories of antics and laughter.  Merle didn’t wait passively for life.  She seized it with both hands. One of her favorite quotes was, ‘Pray, then get in the boat and paddle’.  Merle never let herself drift for long.  Through life’s currents, undertows, and rapids, she didn’t give up. She prayed and paddled.

Merle was predeceased by her parents, her siblings, her ex-husband and most recently, her youngest daughter, Gale Elaine, whose death broke Merle’s heart.  Yet still she paddled.  And prayed. She is survived by her son and daughter-in-law, Budd Phillips and Priscilla of Fort St John, BC; her daughter and son-in-law, Dawn Paquette and Bob of Crossfield, AB. Both Budd and Dawn have many stories of the Mama who loved them, nurtured them, and rooted for them.  She is treasured by her six grandchildren, Melissa (Rob), Kimberly, Kelsey (Calvin), Tyler (Jylece), Jamie (Justin), and Jean Luc.  These grandchildren will remember the grandma who loved ‘all things rhubarb’ desserts, and for the times she changed the channel mid-program from cartoons to golf.   But most of all, they will remember her love, laughter, and unconditional acceptance of each of them.  Merle has eight great grandchildren, Rhys and Brynna Tucker, Emerson and Ellis Stewart, Makenna and Lucas Fuhriman, Leighton, and Grady Paquette.  Her legacy lives in each of them.  Left with decades of memories are two sisters-in-law, Leona Black of Courtney, BC, and Lillian Black of Edmonton, AB, and ten nieces and nephews.

Merle took her own advice to heart. I’ve always tried my best and believed you should treat others how you want to be treated. If you want that, you have to be that. She described her life as blessed, because her family and friends made her feel blessed every day. Merle’s favorite song was “The Rose”.  This refrain describes Merle and her beautiful philosophy of life.

“I say love, it is a flower

And you, its only seed”

Rest in Peace Merle, Mom, Grandma, Great Grandma, Aunt.  You are missed. The many seeds of love you planted will forever bloom in our hearts.

A Memorial Service will be held at Crossfield Baptist Church (285176, Hwy 2A, Crossfield, AB) on Saturday, November 19, 2022 at 3:30 p.m. Snack refreshments and friendly stories of Merle’s life to follow.

If friends so desire, memorial tributes may be made directly to support the Junior Golf Program at the Carstairs Golf Club where Merle was a long-time member.

Share Your Memory of
Merle
Upload Your Memory View All Memories
Be the first to upload a memory!
Share A Memory
Send Flowers