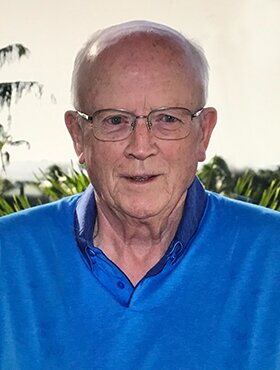 Lawrence (Ole) Olson, beloved husband, father and grandfather passed away on Friday, October 28, 2022, at the age of 78.

Lawrence was born in Nelson, BC on October 31, 1943, to parents Gotthard and Gertrude Olson. Lawrence married Judy in Nelson, BC in 1966, and they were inseparable for 56 years.  His job with the BC Ministry of Transportation and Highways took them from Nelson to Salmo, Nakusp and finally to Fort St. John in 1976, where they lived until retiring to Airdrie in 2006.

Lawrence was never content to sit and relax; he was a doer.  A real jack-of-all-trades, he was a good carpenter, handyman, gardener and cook. He took pride in finishing the basement in his and Judy’s new home in Airdrie.

Lawrence loved golfing, camping, and travelling as often as he could. He also spent many happy days skiing with Lorne and Rayann at Powder King. In his later years, he enjoyed gardening, cooking, reading, online puzzles and almost any televised sport he could find.

One of his most memorable trips was a month-long camping trip up the Alaska Highway from Fort St. John to Anchorage with Judy, Lorne, Rayann and their dog Jiggs. With Judy, he took wonderful trips to Hawaii to celebrate their 25th and 50th wedding anniversaries. Lawrence’s last big bucket-list trip was to Sweden, Norway and Switzerland in 2012.

Lawrence was predeceased by his parents, Gotthard and Gertrude, brother Blair, and grandson Spencer Ritchie.

Funeral Services will be held at McInnis & Holloway (Crowfoot, 82 Crowfoot Circle NW, Calgary, AB), on Saturday, November 5, 2022, at 2:00 p.m. Reception to follow in the Hospitality Centre at the Funeral Home. Condolences, memories and photos can also be shared and viewed here.

Share Your Memory of
Lawrence
Upload Your Memory View All Memories
Be the first to upload a memory!
Share A Memory
Send Flowers