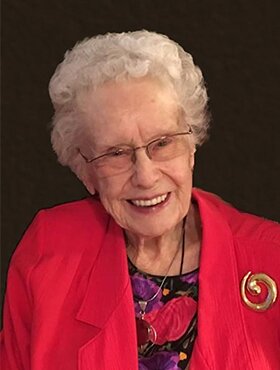 Helen Irene Driedger of Calgary, AB met her Lord in heaven on Friday, October 28, 2022, at the age of 96 years

Helen was born in Hepburn, Saskatchewan, on February 22, 1926, the second child born to Frank and Marie Gossen. When she was four years old her father passed away, leaving her mother to raise four small girls alone. Early life without a father during the depression was very difficult.

After her father’s death, the family moved to Dalmeny, SK, to take over the telephone switchboard.  Helen worked many hours there while in high school. In Dalmeny, she was baptized upon confession of her faith in Jesus Christ.  It was there she met Peter Driedger and they were married on August 11, 1946, in Chilliwack, BC.

After her marriage, Helen finished high school and trained to be a teacher; a profession she loved and practiced for many years. She often heard from former students, expressing their appreciation for her love and teaching.  Peter and Helen lived in Saskatchewan, Alberta, Kenya, back to Saskatchewan, and finally moved to Airdrie, AB in 2009. They also enjoyed many winters in Arizona after their retirement.

Wherever Helen and Peter lived, they were very active in their church. Helen also loved cooking, baking, painting, sewing, gardening, knitting, and crocheting. She made many celebration dinners for her family and others over the years; and crocheted blankets for all her grandchildren and most of her great-grandchildren.

Helen’s favorite Bible verse was Romans 8:28 - “And we know that in all things God works for the good of those who love him, who have been called according to his purpose”. This passage became even more special as she aged, and life became more difficult.

Helen was predeceased by her parents, two children, Brian and Connie (Wall); three sisters, Elsie, Hazel, and Adeline; and her husband of 71 years Peter Driedger who passed away on March 2, 2018. She looked forward to being with them again in Heaven. Helen was an incredibly strong woman who loved God and her family with an intense determination.

A Funeral Service will be held, on Saturday, November 5, 2022, at 1:30 p.m. Family and friends who are unable to attend in person are invited to join Helen’s service streamed live (https://youtu.be/SgniV53IJQw) on the day of the service. For those who are unable to view live, a recording of the service will be posted. Condolences, memories, and photos can also be shared and viewed here.

Share Your Memory of
Helen
Upload Your Memory View All Memories
Be the first to upload a memory!
Share A Memory
Send Flowers