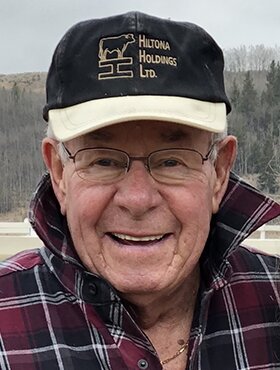 Lloyd Sandau, 83, a kind and humble man, passed away peacefully in his home on Saturday, November 5, 2022, after a courageous battle with cancer. In the time before his passing, Lloyd was surrounded by his family and loved ones.

Lloyd was born on April 4th, 1939, in Maple Creek, SK. He was one of eight children born to Jacob and Margaret Sandau. At the age of 17, he moved to Calgary, AB, where he met the love of his life, Carol. Their everlasting love was filled with family, faith, and friendships. Together they had four children, Lori, Melanie, Cathy, and Darin. Lloyd spent many years with his family coaching his kids’ softball, camping, snowmobiling, and boating at Mara Lake. Lloyd and Carol enjoyed travelling the world together throughout the years.

While raising their family together, Lloyd worked as a plumber and started a successful business, Universal Mechanical. Volunteering and giving back to his community were important parts of Lloyd’s life. Lloyd was always willing to lend a helping hand to anyone in need. He was involved with Foothills Lutheran Church in many capacities, the Mechanical Contractors Assoc., Springbank Park for All Seasons, Springbank Curling Club, Springbank Lion’s Club, and Golden Vista Board in Apache Junction to name a few. Lloyd was a devout Christian and the embodiment of love, laughter, wisdom, integrity, and loyalty.

Lloyd’s hard work ethic and determination paid off, allowing him to retire at a young age. In his early years of retirement, Lloyd and Carol spent their time between their Springbank acreage and summer property at Mara Lake. In later years, they became snowbirds, residing in Apache Junction, Arizona during the winter months. Lloyd loved spending time with his grandchildren and was always very involved in their lives.

Lloyd is lovingly remembered by his devoted wife of 63 years, Carol, his children, Melanie Spafford, Cathy (Darren) Toews, and Darin (Perla) Sandau; and grandchildren Zach, Madison (Braden), and Miranda Spafford, and Joel (Serena), Shayleen (Garrett) and Luke Toews. He is also survived by seven siblings and their spouses, Carol’s brother and his wife, and many cousins, nieces, and nephews. Lloyd will be joining his and Carol’s parents, his daughter, Lori, and many family and friends in heaven.

Funeral Services will be held at Foothills Lutheran Church (3104 – 34th Avenue N.W., Calgary, AB) on Thursday, November 17, 2022, at 1:00 p.m. Reception to follow in the Hospitality Centre at McInnis & Holloway Crowfoot. The family would love to see you and hear stories about Lloyd. Family and friends who are unable to attend in person are invited to join Mr. Sandau’s service streamed live at https://www.facebook.com/foothillslutheran on the day of the service. In lieu of flowers, if friends so desire, memorial tributes may be made directly to the Alberta Cancer Foundation, c/o Tom Baker Cancer Centre, 1331 - 29 Street N.W., Calgary, AB T2N 4N2 Telephone: 1 (866) 412-4222.  www.albertacancer.ca/memorial. Condolences, memories, and photos can also be shared and viewed here.