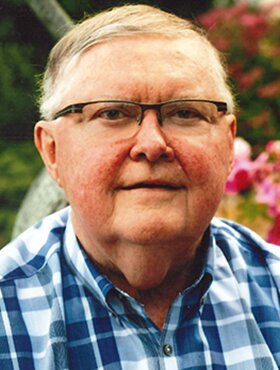 Irvine "Irv" Koop, of Calgary, AB, passed away peacefully on Tuesday, November 8, 2022, at the age of 76 years after a six-year battle with cancer.

He leaves behind his beloved wife, Maureen, whom he married in 1970. He is survived by his daughters, Allison (Cameron) Fraser of Calgary, AB, and Heather Koop (Coral Clay) of Victoria, BC; grandchildren Peyton, Bree, and Josie Fraser; step-granddaughter Sierra Appleby-Fraser, and step-grandsons Ben Montgomery and Dylan Clay.

Irv was born and raised in Morris, MB, until he left for the University of Manitoba in 1964. After graduating with a B.Sc. in Mechanical Engineering in 1968, he relocated to Calgary to embark upon his career in the oil and gas business, beginning with Mobile Oil Canada. From 1974 to 1991, Irv worked for BP Canada, leaving as Senior Vice-President, Oil and Gas Division, which included a two-and-a-half-year stint in Aberdeen, Scotland.

Irv’s professional memberships included the Association of Professional Engineers, Geologists, and Geophysicists, the Canadian Institute of Mining and Minerals, the Canadian Energy Research Institute (past Chairman and Director), and in 1992, Irv was selected to be the inaugural Chairman of the Canadian Association of Petroleum Producers (CAPP). As CAPP Chairman and member of the Board, he was often the industry’s policy witness at National Energy Board regulatory hearings and testified at North American Free Trade Agreement hearings.

After his early retirement, Irv was eager to give back to the industry and community. He was Chairman of the United Way of Calgary in 2001, and in 2002, was a recipient of the Queen’s Golden Jubilee Medal for his community service.

Irv’s generosity and spirit of giving was by no means limited to his professional life. He loved his family and friends fiercely, and devoted so much of his time, energy, and love to their well-being, growth, and accomplishments.

He enjoyed telling stories and jokes (the dirtier, the better), was an avid golfer, and enjoyed watching all sports, and in his youth, playing them.

Irv loved to travel, having seen much of the world, and especially enjoyed many river and ocean cruises with Maureen. For twenty years, Irv spent every winter in Palm Desert, CA, where he and Maureen loved to host his family and friends.

The family would like to thank the Tom Baker Cancer Clinic staff, in particular Dr. Krause and Dr. Querashi, for their outstanding service and support. If friends so desire, memorial tributes may be made directly to United Way of Calgary and Area, #600, 1202 Centre Street S.E., Calgary, AB T2G 5A5 Telephone: (403) 231-6265, www.calgaryunitedway.org, or to a charity of their choice.

A Celebration of Irv’s Life will be held at McInnis & Holloway (Fish Creek, 14441 Bannister Road SE, Calgary, AB) on Tuesday, November 15, 2022 at 11:00 am. Reception to follow in the Hospitality Centre at the Funeral Home. Condolences, memories, and photos can also be shared and viewed here.

Share Your Memory of
Irvine
Upload Your Memory View All Memories
Be the first to upload a memory!
Share A Memory
Send Flowers