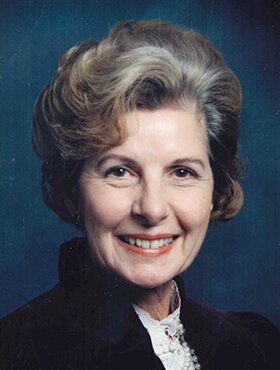 Estelle passed away peacefully, aged 96, with family at her side. She will be deeply missed by her children, Sherry Ramsden (Leagh), Joan Norbom (Mark), and Bradford Burton (Mayte); grandchildren, Philip (Diane), Laura (Brent), Gregory (Jacylne), Jack (Caitlin), Max, Rebecca, and Russell (Summer); great-grandchildren, Madison, Rylee, Sebastian, Brenya, Sadie, Cailee, James, Adele, Noah, Khleo and Khaia; brother, Fr. John Pierce OFM; as well as her extended family and the many friends she made on her journey through life.

Born in Melrose, Massachusetts, one of six children of Ralph Pierce and Frances Mutty, Estelle spent her childhood exploring Walden's Pond, skiing Mount Hood, and digging clams on the beach at Cape Cod. She was always proud of her maiden name, as a direct descendant of Franklin Pierce, the 14th President of the United States (a fact she loved to drop into any conversation).

Estelle received her Registered Nurse diploma from St. Elizabeth's Hospital and worked in the Boston area for several years before joining WIMSA (Women in Military Service for America) to help the World War II effort. After the war, Estelle moved to Topeka, Kansas for work at the Menninger Clinic. This is where she met her future husband, Robert (Bob) Burton, who was recovering from a combat injury sustained in the Solomon Islands during WWII. Together the young couple lived in Manhattan, Kansas, then in East Glacier Park and Billings, Montana where she fully embraced the adventurous western way of life.

In 1966, Estelle and Bob moved their family to Calgary. They spent weekends exploring the Alberta wilderness from their remote cabin. Estelle had a natural talent for knitting and sewing, creating beautifully intricate pieces. She was an avid reader and operagoer and enjoyed a varied social life, including the Calgary Golf and Country Club. She was especially proud to have been a founding member (and later President) of the First Emigrant Chapter of The National Society of Colonial Dames of the 17th Century.

After the death of her husband in 1976, Estelle worked at PanCanadian Petroleum Ltd. and later married Vernon V. Van Sant Jr., who passed away in 1991. Estelle then decided to try her hand at oil painting and produced many works, with several being sold or winning ribbons at the annual Calgary Stampede Art Show. She also pursued her love of travel, frequently visiting family in North America, Europe and Asia.

Estelle always put family first. She was our anchor and dearly loved each and every one of us.  For that, we are eternally grateful.

Estelle’s family send their heartfelt appreciation and thanks to Mayfair Care Centre, whose nurses, companions, and staff members were absolutely wonderful with our mother. You became her family when we could not be there.

Please join Estelle’s family for a Celebration of her Life to be held at McInnis & Holloway (Park Memorial, 5008 Elbow Drive SW, Calgary, AB) on Saturday, January 7, 2023, at 2:00 p.m. Reception to follow. Condolences, memories, and photos can also be shared and viewed here.

In lieu of flowers, please consider a donation, in memory of Estelle, to Operation Smile, an organization she passionately supported for years: http://support.operationsmile.org/site/TR?px=3064502&fr_id=2576&pg=personal

Share Your Memory of
Estelle
Upload Your Memory View All Memories
Be the first to upload a memory!
Share A Memory