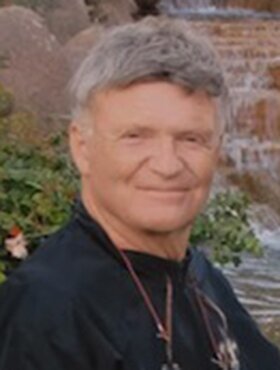 It is with great sadness we announce the passing of Robert “Keith” Gammage of Olds, AB, on Thursday, November 17, 2022, at the age of 77 years.

Keith came into this world on April 7, 1945, in Dodsland, SK. Boy, the world would never be the same! Keith cherished his childhood in the prairies. He was presented with physical challenges from a young age, but that NEVER held him back. His determination allowed him to obtain degrees from Lakehead, Western, and a Masters of Education from the University of Windsor.

In 1969, Keith married Carole Heise and they had two strapping lads, then Daddy’s little girl came along. Keith was very proud of the people his kids became. While inspiring his students, he honed his chalk-throwing skills, being employed by the Kent County Board of Education for twenty-eight years, specializing in math and science. During this time, Keith coached basketball and soccer and was well known for taking his students to various sporting events, Pistons games mostly, leaving a lasting impression on his students' lives.

Keith was a social butterfly and storyteller extraordinaire! Someone once said, “if you give the man a minute he would take your life away” (in a memorable way). Chief was a devoted sports fan, Flames, Wolverines, and Rough Riders were his passion.

For the last twenty-five years of Keith's life, he could be found traveling the world with his second wife Jodi. Committing felonies and making memories, Keith was larger than life. There are no words that describe how much “Chief” will be missed.

Besides his partner in crime Jodi, Keith is survived by his three brats, Calvin (Terri), Bryant (Tina), and Marla; grandchildren, Ashleigh, Zakkaree, Madison, Makenna, Kolton, and Emma; great-grandchildren, Everett, Smith, and Emilia; and stepchildren Erin (Jem) and his two sisters, three grandchildren Kieran, Kylie and Brae-lyn. Keith is also survived by his two sisters, Marion and Heather; and various nieces, nephews, and cousins. Keith was predeceased by his parents, Bob and Ruth Gammage.

If friends so desire, memorial tributes may be made directly to the Canadian Spinal Research Organization, 2, 120 Newkirk Rd., Richmond Hill ON L4C 9S7 Telephone 1 (800) 361-4004, www.csro.com/donate.