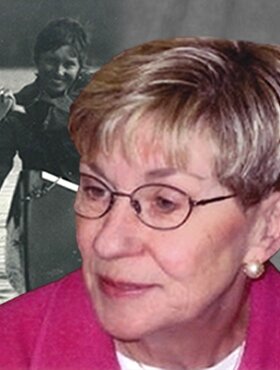 It is with great sadness that we announce the passing of Mary (nee Mycyk) Tebo on Tuesday, November 22, 2022.

Mary was born in Synevidsko, Ukraine, on December 7, 1940. In 1944, Mary, her parents, and her older brother Oleh, along with forty members of their extended family, fled their homeland to escape the advancing Soviet army. Their slow and difficult journey led them to a displaced person’s camp in Berchtesgaden, Bavaria, where the refugees settled in an established Ukrainian community with a church, school and choral and drama groups.

In 1948, her family sailed from Munich to Halifax and then travelled to Taber where they worked on sugar beet farms. After their obligatory two years of labour, many family members moved to Toronto. Mary’s parents stayed in Lethbridge, where Mary graduated from St. Joseph’s High School. She earned her BEd degree from the U of A in Edmonton, and, subsequently, her Med degree from the U of C in Calgary. Mary taught English at James Fowler, Central Memorial, Queen Elizabeth, and Western High Schools in Calgary.

Mary married Maurice (Ron) Tebo on August 15, 1970. Mary said that Ron's love, loyalty, and strength were her mainstays. She and Ron spent many summers canoeing, hiking, and travelling in Canada and abroad. They were avid readers and supporters the of arts. Mary was keen bridge player, achieving her LifeMaster in 2020.

Mary was predeceased by her husband, Ron, on November 17, 2020, her brother Oleh Mycyk, her niece Katya (Heather) Mycyk, and her parents Dmytro and Irena Mycyk.

Mary is survived by her niece and God-daughter Jennifer (Geoff) Oestreicher, and their three children; her brother-in-law and sister-in-law, Hugh and Lynda Tebo, and their daughter; her uncle John and wife Vera, and their two children; and her cousin Maria Tesla. She is also survived by many loving and cherished friends who enriched her life.

Due to the pandemic, there will be no funeral service. Mary will be cremated and will be buried with her husband.