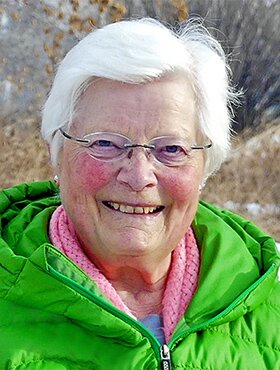 Wendy was born and raised on the family farm along with her brother Arthur and sisters Jean and Mary in the village of Kingsnorth near Ashford in Kent England.

Wendy went to the village primary school from the age of five until she was eleven years old and then attended the South Secondary School for Girls in Ashford, England.  At the age of thirteen she attended Folkestone Technical High School for Girls until the age of seventeen where she learnt shorthand, typing, accounting and all aspect of an office environment.

In May 1970 Wendy and her older sister Jean immigrated to Canada getting a flat together in Ottawa, ON, where their brother Arthur was living at the time.  Wendy took a job with the RCMP, then Carleton University. Sometime around 1975, they moved to Calgary, AB, as Arthur had moved to Edmonton, AB, and they wanted to be close by but not too close.

Once here, she pursued a career in oil and gas as a Landman for Westmin Resources and then became an independent contractor with Enerplus and other small companies for the rest of her career, efficiently doing work she thoroughly enjoyed.  She was a member of the CALEP and CAPLA.

She joined the Calgary Ladies Field Hockey Association, stalwartly playing Back for Blue Streaks, and played for many years making lifelong friendships. She travelled the world with the Calgary Cowgirls, playing in the Golden Oldies tournaments and widening the circle of field hockey friends. As she began shorter work weeks, she joined the Skrastins Hiking Club.  A new circle of friends and the love of the outdoors became a huge part of her life. She put her contract skills to work as Skrastins efficient membership coordinator for about six years. Covid saw her organizing city walks and shepherding participants through the pandemic with fresh air, comradery, and a new appreciation of what our city has to offer. She also went to the Opera, with treasured friends from her working times, belonged to a book club, and subscribed to Theatre Calgary.

Always energetic and smiling, she will be sorely missed.

Wendy is survived by her sister and brother-in-law Mary (Dave), her brother Arthur and eight nieces and nephews.

Funeral Services will be held at McInnis & Holloway (Fish Creek, 14441 Bannister Road SE, Calgary, AB) on Monday, December 19, 2022, at 2:00 p.m. Reception to follow in the Hospitality Centre at the Funeral Home. Family and friends who are unable to attend in person are invited to join Miss Hayward’s service streamed live (see below) on the day of the service. For those who are unable to view live, a recording of the service will be posted. Condolences, memories, and photos may also be shared and viewed here. If friends so desire, memorial tributes may be made directly to the charity of the donor’s choice.

Share Your Memory of
Wendy
Upload Your Memory View All Memories
Be the first to upload a memory!
Share A Memory
Send Flowers