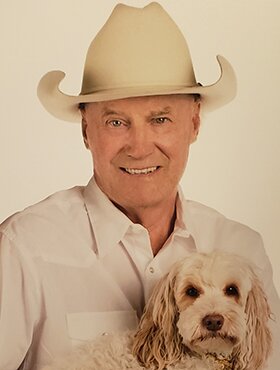 Gordon F. Dixon K.C., 79, passed away on Sunday, November 27, 2022 at the Foothills Medical Centre in Calgary, Canada, surrounded by family.

Gordon was born to Kenneth S. Dixon K.C. and Patricia M. Dixon (nee Kier) in Annapolis Royal, Nova Scotia in 1943. After the end of World War II, Kenneth and Patricia moved Gordon and his two brothers, Michael (predeceased) and John to Calgary, Alberta. The family spent many formative years at Whiskey Creek Ranch, and Gordon later created the same with his family at their own Priddis ranch.

After graduating from Central Memorial High School Gordon enrolled at the University of Calgary, and later transferred to the Law School at the University of Alberta. He joined his father at MacLeod Dixon in Calgary after graduating from Law School, where he practiced law for 24 years. Later Gordon set up his own firm of Dixon Law. Gordon’s Law career spanned five decades, and he was an active member of the Alberta Bar Society and the Canadian Bar Association, Alberta Branch having recently celebrated his 50th membership year. Throughout his legal career he worked on several ground-breaking files which permitted him to appear before the Supreme Court of Canada on many occasions.

Never content with the status quo or remaining idle, Gordon took a hands-on approach in business, where he was involved with several companies in a variety of sectors including natural resources, utilities, and tourism. The teams he built in these companies brought him great pride.

Gordon believed that he needed to be a part of the broader community either through direct participation or through, his business’ activities, or via philanthropy. He was an avid supporter of several organizations – most notably the Alberta Children’s Hospital, the BC Children’s Hospital, and as an early board member of the Calgary Philharmonic Orchestra, Alberta Ballet, and Theater Calgary. In his spare time, you would find Gordon with his beloved dog Lucy or socializing with friends at the Ranchmen’s Club, Calgary Golf and Country Club, the Downtown Rotary Club, and at his home in Rancho Mirage.

Gordon lived life to the fullest and with adventures involving dirt biking, fishing, skiing, hiking, camping, sailing, horseback riding, roping, and golfing; for Gordon, the more adventure events that could be combined, the better. Gordon was a sports enthusiast from an early age – from ski racing representing the Province of Alberta in the early 1960s, spending many happy hours heliskiing in Blue River, to donning a downhill ski suit and competing in his 70s.

He relished a good party with family and friends, dancing, and singing his famous rendition of ‘Ghost Riders in the Sky’. His joy of these events was infectious, and Gordon always ensured that everyone present had a good time.

Gordon enjoyed travelling for both for business and pleasure. His travels took him to China in the 1970s, and later to Burma, Bolivia, South America, Europe, the Middle East, Africa, throughout North America, and countless road trips.

He waged a long battle with cancer spanning almost 17 years. His determination, positive outlook, and the support of his wife Marion helped him overcome many health challenges throughout this time and to live life to the fullest.

With the heart of a cowboy and the spirit of a thoroughbred, Gordon touched all with his genuine love of life, curiosity, optimism, enthusiasm, and gregarious charismatic personality. He was a person who always believed in the positive and lived the mantra of with enough effort and enthusiasm, anything is possible. For everyone who met him, listening to Gordon was like someone reading from an adventure book.

The family would like to express their deep appreciation and heartfelt thanks for the kindness, support and care provided by Dr. M., Dr. G., Dr. K., and the entire team of Unit 46 at the Tom Baker Cancer Centre.

A Memorial Service and Celebration of Gordon’s Life will be held at the Calgary Golf and Country Club (919 - 50th Avenue SW, Calgary, Alberta) on Friday, December 9, 2022 at 12:00 p.m. Dress code in effect at the Calgary Golf and Country Club, while jeans are not permitted, the family encourages you to wear your cowboy hat. Condolences, memories, and photos can also be shared and viewed here.

If friends so desire, the family kindly requests memorial tributes may be made directly to support Dr. John Kelly’s brain cancer research with the Arnie Charbonneau Cancer Institute at the University of Calgary, 2AA07-3280 Hospital Drive NW, Calgary, Alberta, T2N 4Z6 (payable to the "University of Calgary" with "Arnie Charbonneau Cancer Institute" in the memo line of the cheque), Telephone: 403-210-3934, engage.ucalgary.ca/Charbonneau.