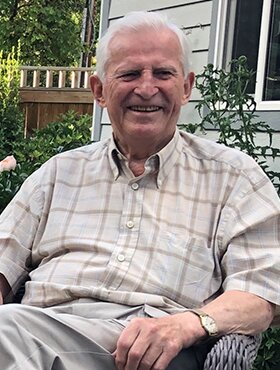 Paul Chrumka, beloved husband of Stephanie Chrumka (Gittus) of Calgary, Alberta, passed away on Friday, December 2, 2022 at the age of 90 years surrounded by family. He lived a long full life and was loved and respected by his large family, many friends, and colleagues.

From his humble beginnings on a farm in Tilley, Alberta, Paul worked to become the Honourable Justice Paul Chrumka, deepening the field of law with his vast knowledge and experience.

Paul graduated from the University of Alberta with a Bachelor of Law and was called to the bar in 1959. He was fortunate to start his career with Edward McCormick LLP in Calgary who taught him how to live on $100 a month while thriving in the practice. Paul moved on to become a Prosecutor and subsequently the Chief Crown Prosecutor of Southern Alberta. The two decades where he served as Crown Counsel, held both great successes and memories for Paul during a period of unprecedented growth in the city. In 1982 Paul realized a career highlight and was appointed to the Court of Queen’s Bench where he sat for over 25 years. He was well respected by his fellow justices and the bar, noted for presiding with dignity, compassion, and fairness. Many of those whom he mentored, continue to sit on the bench today.

Paul believed in giving back and was an active participant in the National Criminal Law Program. In the later part of his career, he travelled extensively throughout Northern Canada as a deputy judge in the Yukon, Northwest Territories, and Nunavut. The beauty of those regions impacted him deeply. He would return home with local artwork that is still scattered throughout the family home. Another joy of his career was the opportunity he had to study French in Québec. Once he retired, he worked with the Alberta Human Rights Commission. With a career that spanned over 55 years, Paul reflected that throughout it all, he would get up in the mornings looking forward to what each day would bring.

He loved pheasant hunting with his brothers and friends in the fall near Tilley. He hosted loud and boisterous parties at The Ranchmen’s Club drinking his signature gin martini with a twist of lemon. Come summer, he enjoyed time with his family and the many, many cousins at Shuswap Lake. He was kind, honourable, quick-witted, the consummate storyteller, caring, generous, fiercely intelligent, and devoted to family.

Paul is survived by his daughters, Margaret Chrumka (Paul Clark) of Kamloops, BC, Christine Stiles (Michael) of Calgary, and Jennifer Chrumka (Devin Buchanan) of Kamloops; his son Doug Chrumka of Calgary; and his nine grandchildren, Caroline, Ruth, and Jane Chrumka; Georgia Mowat and Clementine Clark; Luke and Nicholas Sherwin; and Henry and Isla Buchanan. Paul is also survived by his brother, Albert (Karen) of Edmonton. He was predeceased by his parents, Maria and Karol Chrumka; brothers, Joseph (Agnes) of Tsawwassen, BC, and Mel of Calgary; and his sister, Ellen Sharples (Brian) of Kingston, ON.

Until the very end Paul kept his sense of humour, his commitment to the Catholic church, and most of all, his love for family. He will be deeply missed. Relatives and friends are invited to Prayers at McInnis & Holloway (5008 Elbow Drive SW, Calgary, AB) on Tuesday, December 6, 2022, at 7:00 p.m.

A full Funeral Mass will be celebrated at Sacred Heart Catholic Church (1307 – 14th Street SW, Calgary, AB) on Wednesday, December 7, 2022, at 3:00 p.m. Family and friends who are unable to attend in person are invited to join Paul’s service streamed live (see below) on the day of the service. For those who are unable to view live, a recording of the service will be posted. Condolences, memories, and photos can also be shared and viewed here.

The family would like to extend their gratitude and appreciation to the doctors, managers, nurses, and resident care partners at Amica Britannica.

Share Your Memory of
Paul
Upload Your Memory View All Memories
Be the first to upload a memory!
Share A Memory