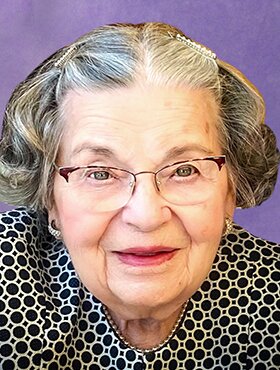 Elsie Kutryk (nee Humenuk), beloved wife of the late Edward Kutryk of Calgary, AB, passed away on Saturday, December 3, 2022, at the age of 98.

In her words, Elsie enjoyed “a great and wonderful life”. She immigrated to Canada at a young age with her family, and they settled in the hamlet of Shepard, AB. She attended the local school until her grade 12 year (1941/42), when she boarded at the hamlet of Kathyrn with the CNR Station Agent’s family, the Coldwells. She then lived with her Aunt Suzanne in Calgary and graduated from Garbutt’s Business College. From December 1942 to June 1954, she was employed in the Communications department of the Canadian Pacific Railway as a radio service messenger and later as a stenographer, where she was intrigued by her manager’s interest in amateur radio.

With the assistance of her parents, she purchased a home on 17th Ave SW, and her brother and sister lived with her while they attended grade school in Calgary. She met Edward, and they were married on June 5, 1954.  After the wedding, Elsie worked in the time sheet office of Burns & Co. until the arrival of her daughter Mary-Ann, in 1957. The family settled in NW Calgary, and Elsie’s role as a full-time mother expanded in 1960 with the birth of her son Terrance.

In 1969, she returned to the workforce and joined the University of Calgary steno-pool.  In this role, she thoroughly enjoyed reading and transcribing various research papers and applications. In a case of life redux, the family moved from NW Calgary to a farm south of Shepard. Elsie took a lengthy hiatus from external employment until the 1980’s when she joined Employment Canada in their Centre 70 south Calgary office. She was invigorated by the technological change that had taken place and embraced learning and adapting to the age of word processors and computers.

In the 1990s, she joined the Calgary Amateur Radio Association. Elsie obtained her Basic amateur radio qualification and her radio call sign VE6GMT. Although she was not active on the air, she was involved in the Calgary Ladies Amateur Radio Network well into her 80s. She took delight in socializing with the ladies through the group’s breakfast and coffee get-togethers.

She appreciated the world’s beauty and wonder; thoroughly enjoying the 1970s movie travelogues at the Jubilee Auditorium, the Philharmonic date nights with her husband Ed and the travel adventures of her children. Elsie’s curiosity extended to current events, with the television constantly tuned to news channels. She read the print, Calgary Herald daily and later the electronic edition on her iPad.

Physically active her entire life, in her later years, Elsie attended Senior’s aerobics at the Family Leisure Centre (now the Trico Centre for Family Wellness). As her access to mobility declined, she was able to continue living in the family home with the assistance of her caregivers. There, she walked to the barn daily until the last few weeks of her remarkable life.

Her everlasting motto was “Everything in moderation”. Elsie was a kind, joyous and gentle lady who was quickly recognized by her smile and congenial manner.  She was always supportive of her family and all she encountered.  Words can not convey how much she will be missed.

The family expresses deep and sincere appreciation to the people who assisted her in her later years:  Felina Delacruz, Cindy Punzalan, Riclyn Martinez, Corazon Cordial and Jovelyn Palas for their outstanding, kind, and compassionate care. Particular thanks are extended to her primary care physician of many years, Dr Melanie Hnatiuk and her physiotherapist, Ana Julian, for making a tremendous difference in her life.

If friends so desire, memorial tributes may be made directly to the Calgary Health Trust, the Foothills Country Hospice or a charity of your choice.

In living memory of Elsie Kutryk, a tree will be planted in the Ann & Sandy Cross Conservation Area.

Share Your Memory of
Elsie
Upload Your Memory View All Memories
Be the first to upload a memory!
Share A Memory
Send Flowers