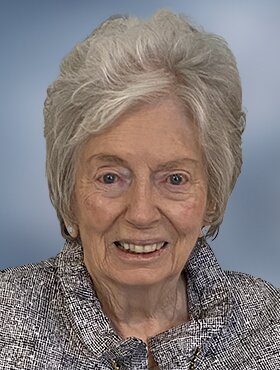 She was born in Nauwigewauk, NB on April 1, 1932, the youngest of five children. After high school, she attended business college in St. John, NB. Upon completion, she went to work at Westinghouse in Hamilton and worked her way up to office manager. In the early 1950s, Mable also volunteered with the Air Force reserve in Security (clearance) in Hamilton.

Mabel enjoyed her early days, dancing on weekends, golfing, skiing, and breaking hearts. Having mutual friends, Mabel and Ken Yeo’s paths crossed often. Ken was too cautious, and they dated for many years before marrying in 1982. They continued to have a wonderful life together for 36 years. Mabel and Ken loved to travel and go on bus trips and cruises. Their honeymoon was an around the world cruise. Mabel actually loved having fun in general and people were naturally drawn to her.

Upon the completion of their honeymoon cruise, they built a home in Bragg Creek, AB and settled there. They were both avid golfers and Mabel was particularly proud of several league championships at her and Ken’s home golf course, Wintergreen in Bragg Creek. Mabel had a passion for golf and played until she was 86. Even after that she continued to watch it on TV and keep up with the pro circuit. She was also a member of the Bragg Creek Ladies Auxiliary and developed many friendships there. When Mabel’s health turned just after her 90th birthday, she moved to Amica assisted living in Calgary, where she continued to make new friends.

Mabel is survived by her sister-in-law Isabel, nephews, David, Gary, and Darryl, and nieces, Louise and Dianne. Mabel was predeceased by her loving husband, Ken in June 2018, her parents, Grace (Ganong) Wanamaker and Willis Wanamaker, and siblings, Byron, Olive, Ada, and Ken.

Mabel and her love of life will be missed by her family and many friends.

Condolences, memories, and photos can also be shared and viewed here. If friends so desire, memorial tributes may be made to the charity of your choice.

Share Your Memory of
Mabel
Upload Your Memory View All Memories
Be the first to upload a memory!
Share A Memory
Send Flowers