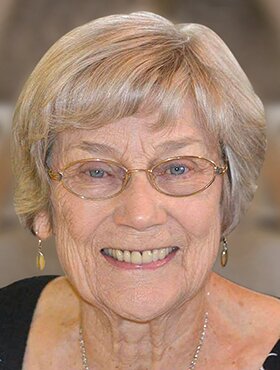 Audrey Margaret Burwash (nee Whyte) passed away peacefully on Thursday, January 12, 2023, at the age of 97 years.

Audrey was predeceased by her parents, Clifford and Clara Whyte, husband Donald Justin Burwash, and grandson Michael Sean Cryer, as well as by her sister and brother-in-law, Opal and Bob Wilson, sister Barbara Prokopow, brother Carson Whyte, and brother and sister-in-law, Bruce and Royce Whyte.

Audrey was a stenographer at the Great West Saddlery in Winnipeg and there she met her husband-to-be, Don, when he came to work there after the war.  Don was soon transferred to Edmonton and their romance continued by letter for several months before he and Audrey were married there in 1947, where their four children were born.  The family relocated to High River in 1959 and then to Calgary in 1960.

Audrey re-entered the workforce when Gordon was in grade two, starting as a receptionist in a doctor’s office. Around that time, she and a friend signed up for night classes to get their high school diplomas, and Audrey later took a first-year English course at the newly formed University of Calgary.  She went on to work in various personnel management positions until her retirement in 1985.

Before and after retirement, Audrey and Don enjoyed many happy times at their cottage at Adams Lake, B.C.  From 1970 to Don’s passing in 1994 and until the cottage was sold in 2000, Adams Lake became one of the dearest spots on earth every summer for their children and grandchildren.

Audrey learned to ski with her son Gordon at Shagannapi ski hill when he was 13 and she was 46, and she continued skiing until she was 78.  Biking, golf and bridge were also a part of her life.  After she was widowed, Audrey began taking art classes in watercolour painting.  She enjoyed this newfound passion well into her 90s and produced many beautiful pieces that grace the homes and hearts of her children and grandchildren to this day.

Audrey will be remembered most for her love of family.  We think with gratitude and not a little awe at the fact that she had 13 great-grandchildren ranging from the age of 27 to three years old, and two identical twin great-great-granddaughters, age eight.  She had a great enthusiasm for life (even if at times her own became a bit more difficult in her very later years), and we smile to think of her gentle, optimistic code for dealing with life’s challenges: “Let’s hit it with a great exuberance!” she would say.

A Celebration of Audrey’s Life will be held at McInnis & Holloway (Park Memorial, 5008 Elbow Drive SW, Calgary, AB), on Saturday, February 11, 2023 at 2:00 p.m. Reception to follow in the Hospitality Centre at the Funeral Home. Family and friends who are unable to attend in person are invited to join Audrey's service streamed live (see below) on the day of the service. For those who are unable to view live, a recording of the service will be posted. Condolences, memories, and photos can also be shared and viewed here.

Rejoice ye with Audrey, and be glad for her, all ye that love her:

Rejoice for joy with her, all ye that mourn for her.

For thus saith the Lord, Behold, I will extend peace to her like a river, …

As one whom his mother comforteth, so will I comfort you; …

If friends so desire, memorial tributes may be made in memory of Audrey to your charity of your choice.

Share Your Memory of
Audrey
Upload Your Memory View All Memories
Be the first to upload a memory!
Share A Memory