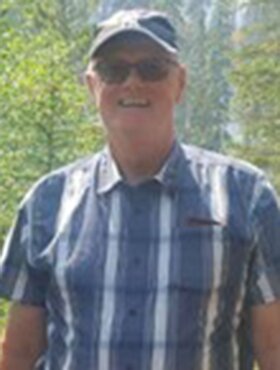 We are deeply heartbroken to announce that David John Dykes, beloved husband of Rose Dykes (nee Wandler) of Calgary, AB, has passed away on Monday, January 23, 2023. Dave was born in Saskatoon on April 24, 1952, and the world welcomed the most kind, funny, sensitive, intelligent, and gentle giant.

Everyone that knew Dave would agree that he was a man of true grit. He showed passion in all his incredible achievements. His biggest achievement he would undoubtedly confess would be the over fifty-year bond in marriage with his lovely wife Rose. His children, Jason and Jodi and his cats were his absolute joy.

His enormous height had to accommodate his loving enormous heart. He always showed tremendous generosity to all his family. When he became a grandpa, his heart expanded even further. Kelvin, Brooklyn, and Jasmine Harris were his absolute everything. There was nothing that he wouldn’t do for his grandchildren. He would often openly express his love for his son in law, Shane, by saying “I couldn’t have picked a better man myself”.

Dave worked in the steel industry for most of his career as a senior estimator and vowed to “never retire”. Being a man of his word, and after completing his daily swimming routine, he was on his way to work. In his spare time, he would make his home immaculate.  He did a complete renovation of their Victorian home in Saskatoon and for the last year he began renovating their “cabin” house in Calgary.

Besides his loving wife, David is survived by his daughter Jodi and son-in-law Shane of Calgary, AB; three grandchildren, Kelvin, Brooklyn, and Jasmine all of Calgary, AB.

David is also survived by his three brothers, Roddy, Douglas, and Jeff; two sisters Mary and Margaret; as well as Rose’s surviving sisters Dorothy, Dorreen, Lorraine, Linda, and their families; and friends.

Dave said that when he took his last breath, he hoped to be greeted by his son Jason, who passed away in 2020.

The family holds comfort that he was reunited with his boy. We only wish we could have had more time together with them. Dave taught us all how to love, be loyal, show compassion, but most of all how to laugh. His jokes and sense of humor will never be forgotten.

“Nothing you would take, everything you gave, hold me ‘til I die, meet you on the other side” - Pearl Jam