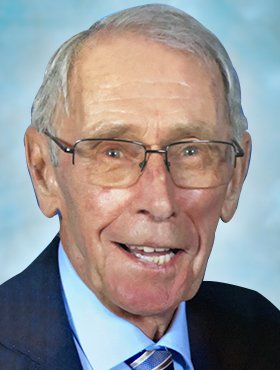 Wayne Johnston, beloved husband of Florence Johnston (née MacDonald) for 55 years, passed away on Sunday, September 27, 2020 at the age of 78.

Wayne joined the Royal Canadian Navy at the age of 18 and served for 8 years. He graduated from Ryerson in Toronto with a business degree and worked for a couple of decades in the pharmaceutical sector before a brief stint selling farm machinery. He never worked on a farm or used farm machinery, but a good salesman is a good salesman! After his first diagnosis of cancer 21 years ago, Wayne retired. His incredible recovery left him with energy to burn and so he started working in the neighbourhood Sobeys grocery store as a greeter. Even there he made a huge impression. He was called Uncle Wayne by many of the customers and all of the staff. People remarked on how much fun it was to be greeted by Wayne when they shopped.

Wayne contributed much to the community as well. He coached hockey for many years, all the way up to Junior level. Countless young men credited Wayne with being a positive influence in their lives. In fact, several of the players ended up staying with the Johnston family for various reasons and seasons.

But Wayne’s greatest accomplishment in his opinion was his family. He was the proud father of Dwayne and his partner Kari, Peter and his partner Christine and amazing Grampa to Adrianna, Jake and Aubrey, all of Calgary, Alberta. He was a loving brother to Linda Price from Ontario, Freddy Johnston, Sharon Langley and Carol Mahr from New Brunswick. He was also a loved godfather and uncle to many.

A private pandemic service will take place. Condolences, memories and photos may be shared and viewed on Wayne’s obituary at www.McInnisandHolloway.com.

If you wish to donate in honour of Wayne’s memory, please consider the Foothills Country Hospice where he spent the last week of his life surrounded by friends, family and nature. https://www.canadahelps.org/en/dn/m/7268/donation

Services for Wayne JOHNSTON
There are no events scheduled. You can still show your support by sending flowers directly to the family, or planting a memorial tree in memory of Wayne JOHNSTON.
Visit the Tribute Store

Share Your Memory of
Wayne
Upload Your Memory View All Memories
Be the first to upload a memory!
Share A Memory
Send Flowers